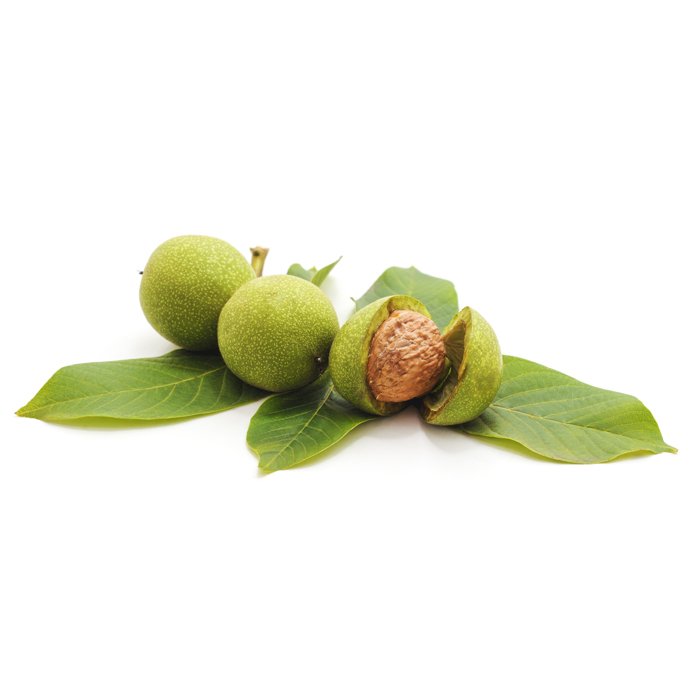 Scientifically named Juglans Regia and produced by the walnuts of the family Juglandaceae, the walnut is an edible fruit with shell. The term walnuts may refer to whole fruit, or without its green shell with the edible core of the nuts.

Originally present in the vast mountainous regions of Eurasia, this tree is now widely cultivated throughout the world for its famous fruits and wood.

For botany, the angiocarpal fruit of the walnut Juglans Regia is a pseudodrupe, an edible seed of a drupe, and thus not a true botanical nut. The fleshy wrap of this drupe is called husk and is commonly used in woodwork and tincture. The nut is a very energetic oleaginous shell fruit. Compared to other oilseeds, it is characterized by its richness in polyunsaturated fatty acids that provide the highest level of omega 3. The nut is also rich in tocopherol and other phenolic compounds that give it a powerful antioxidant activity.

The plantation of walnuts is called a walnut orchard, and like other tree nuts, it must be processed and stored properly since if there is poor storage this will make walnuts susceptible to insect and fungal mold infestations.

Although China is one of the centres of origin of the common walnut, its domestic production reached only 100,000 tons in the 1950s. Since then, with the substantial financial support from the Government, the cultivation of nuts has developed considerably in this country, reaching today 1.9 million tons per year, almost completely absorbed within the domestic market. After this country, the main nut-producing countries are the United States, Iran, Turkey, Mexico, Chile and Ukraine. France, with a harvest of 38,000 tons per year, is the 10th largest in the world. However, our country ranks second in the world behind the United States in exports of walnuts in shell and 7th in exports of walnuts without shells.