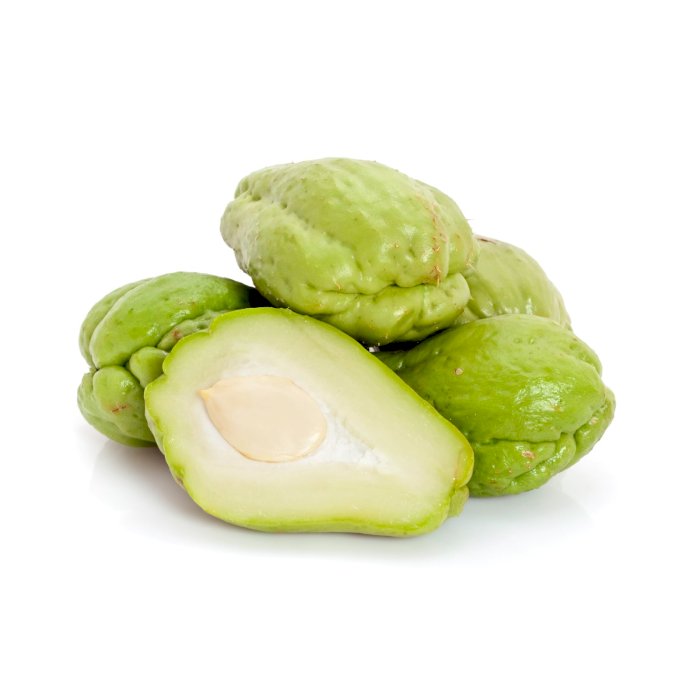 The Chayote, of scientific name Sechium Edule, is a perennial plant belonging to the family Cucurbitaceae. It is cultivated in warm climates as a vegetable garden for its stems and fruit. It also bears the name of mirliton and choko.

This species is native to Guatemala and Mexico, especially from the regions of Oaxaca, Puebla and Veracruz. Already cultivated by the Aztecs and the Maya, Sechium Edule was introduced in the Antilles and South America between the 18th and 19th centuries. The first description of the plant was proposed in 1756 by P. Brown from fruits found in Jamaica. During this same period, the Christophine Chayote was introduced in Europe and then in Africa, Asia and Australia, while its introduction in the United States dates from the end of the 19th century.

After pollination by insects, the fruit appears in the shape of an irregular and ribbed pear, green or white, depending on the varieties. This very fleshy fruit contains only a large seed, a kind of flattened walnut that is never separated from the pulp. Like sweet potato, this perennial plant develops thick rhizomes that are its reserve and conservation organs during the dry seasons. When tender it has a lustrous peel and hard consistency. It can be covered by thorns or not. In Guatemala and Honduras there is a variety with white color inside, and cream color outside, called P. Perulero.

Chayote is a diversified vegetable on its own. In fact, young sprouts are consumed as asparagus after cooking. The fruits, barely ripe, are used as a pumpkin. Raw or cooked, fried, mashed, the tubers are rich in starch and consumed like yams.

It is currently widespread in the tropical and subtropical regions of the world, where it is grown as a perennial or annual plant. Latin America, the home of this plant, brings together the top four world producers, Costa Rica, Guatemala, Mexico and the Dominican Republic. In Martinique or Guadeloupe, the cultivation of Christophine is an integral part of the local agricultural economy. In Guadeloupe, for example, it is the fourth fresh vegetable produced and the first exported. In the Mediterranean areas of Europe, thanks to the mild climate, it is more often cultivated as an annual plant that produces its fruits in autumn.