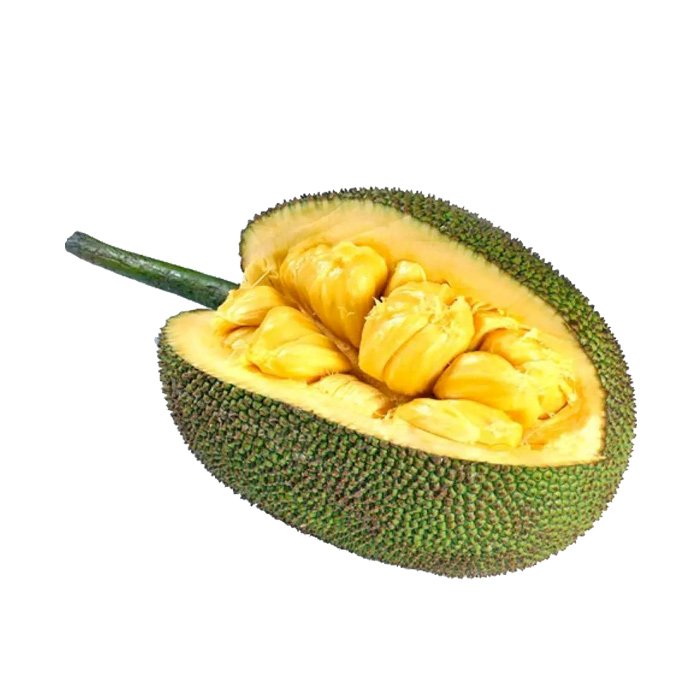 The Jackfruit, of scientific name Artocarpus Heterophyllus, is a tree that belongs to the family Moraceae. In it there are also fig, mulberry, and breadfruit. It is also called jack tree.

Artocarpus Heterophyllus is native to India and Bangladesh. Since then it has been introduced and grown in most of the world’s tropical regions, especially in Southeast Asia and Brazil, mainly for the harvesting of its edible fruits. The name of this fruit would come from the Portuguese Jaka, which in turn was borrowed from the Malay. But it was the Arabs, long before the Portuguese, who brought the Jackfruit to the shores of the Indian Ocean and East Africa. The Portuguese exported it in the 16th century to tropical lands then unknown to the Arabs.

This little-known tropical tree in our lands is actually a cousin of the breadfruit. From the third year, some species, like Singapore’s Jackfruit, are able to grow fruit. However, it usually takes eight years to bear the first fruits. Then you can produce up to thirty fruits a year. It is a large globose berry, composed of a multitude of small berries, making it a polydrupe. It can measure up to 40 centimeters long, have a diameter of 15 centimeters and weigh more than 30 kilos. It is the largest fruit in the world. Its raw pulp has a taste between mango and banana. Cooked, it looks like that of the chestnut.

Many species of the moraceas family contain latex. The jackfruit produces latex on all parts of the tree, and is particularly abundant and sticky. This extremely sticky liquid was traditionally used to catch birds or to make chewing gum.

In 1782, this tree was introduced in the Antilles and in 1825 in Réunion. It is also cultivated in Brazil and Africa. It has been produced mainly in South-East Asia, especially in Thailand, Vietnam, Haiti and Mauritius, but in India it has practically disappeared. The tree is perfect for creating shade and it is common to find it in coffee, cardamom and pepper plantations in the south of the country. In India, the area currently devoted to Jackfruit is 26,000 hectares.