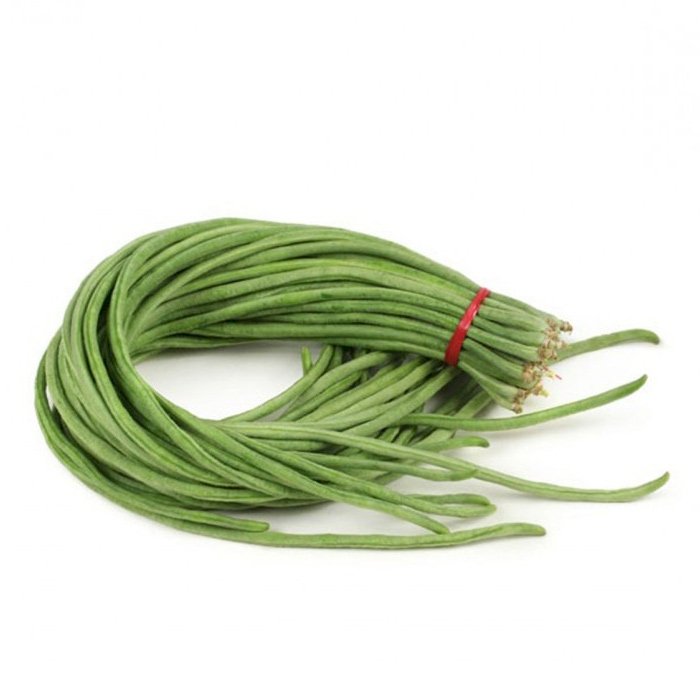 The asparagus bean bears the scientific name of Dolichos Sesquipedalis. It is a climbing herbaceous plant, also called Vigna Unguiculata Sesquipedalis, which belongs to the family of Fabaceae. It is also known as yardlong bean, long-podded cowpea, Chinese long bean, bodi/bora, snake bean, or pea bean.

The asparagus bean is believed to come from Central Africa and spread to India and China thanks to Portuguese sailors. It is said that it also joined Europe, the Caribbean and the Americas afterwards. Sesquipedalis is a Latin name that literally means a 1.5 ft in reference to the length of the vegetable.

The pods are white-green, cylindrical, quite thin,of 30-80 cm long when ripe. They contain a dozen reniform grains, from lilac pink to red or black. The Asparagus Bean delights of a warm temperate climate and prefers shelter rather than direct exposure to the sun. In the northern hemisphere, the pods are harvested from 15 August to the end of October when they reach a length of 40 cm for this variety and 60 cm for the variety Tapir. There is a dwarf variety, the Dall 'Occhio Unguiculatus, which is harvested at 25 cm in length. It is a non-rustic plant that does not withstand temperatures below 12 ºC.

The Bush Sitao, which is a cross between the asparagus bean and the cowpea, is about to dethrone the bean in the Philippines. It blooms like a shrub, requires no trellis and is more resistant to wind than the snake bean.

It is a plant widely cultivated in tropical and subtropical regions, especially in Asia. It is even one of the top ten vegetables in Southeast Asia, especially in Taiwan, South China and Bangladesh, and the most cultivated in the Philippines, where it is called meat of the poor. Today it is popular in the Caribbean, it has become a summer plant in California and in some parts of Europe a greenhouse vegetable.