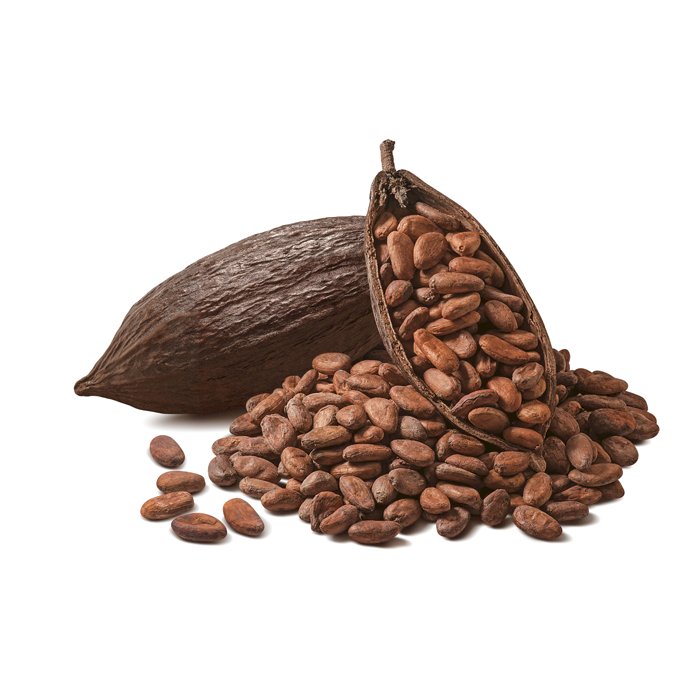 The botanical name of cacao is Theobroma Cacao which means in Greek "the food of the gods". It comes from the word Cacahuatl, in Nahuatl language.

Originating in the Gulf of Mexico, the Amazon and the Orinoco Basin, cocoa beans were used as exchange currency for the Olmecs and the Incas during the pre-Columbian period. Those that were collected were considered of divine origin. According to the Aztecs, it was Quetzalcoatl, the god of vegetation, who taught man how to cultivate cocoa and transform cocoa beans. It was after the conquest of Cortés that they were sent to Spain where they were transformed into chocolate. This became the favourite drink of kings and came to Europe in the 17th century. Three centuries later, chocolate became a popular consumer product.

After about six months, the flowers, which measure only 1 cm in diameter, give their cocoa perfume. These cobs weigh about 400 grams and contain between 20 and 60 almond-shaped seeds. These are attached to a central rachis and are surrounded by a whitish and gelatinous pulp, also known as cocoa pods, where the grains are found, which are fermented and dried to form the chocolate.

Contrary to colonial legend, cocoa beans were not offered to Cortés. It was a robbery accompanied by great violence that led to the murder of King Moctezuma and the genocide of the Aztecs.

Global annual cocoa production is currently estimated at 5.3 million tons. With about 29% of the annual global harvest, Côte d'Ivoire is the world’s largest producer of cocoa beans, with a volume of 1.6 million tons, valued at approximately $1.6 billion. Ghana, Nigeria, Cameroon, Indonesia, Brazil, Mexico and Ecuador follow in order of importance. It should be noted that cocoa farmers often live in poverty. Last year, Ghana and Côte d'Ivoire temporarily suspended cocoa production in order to obtain a fairer distribution of cocoa-growing wealth from industrialists.