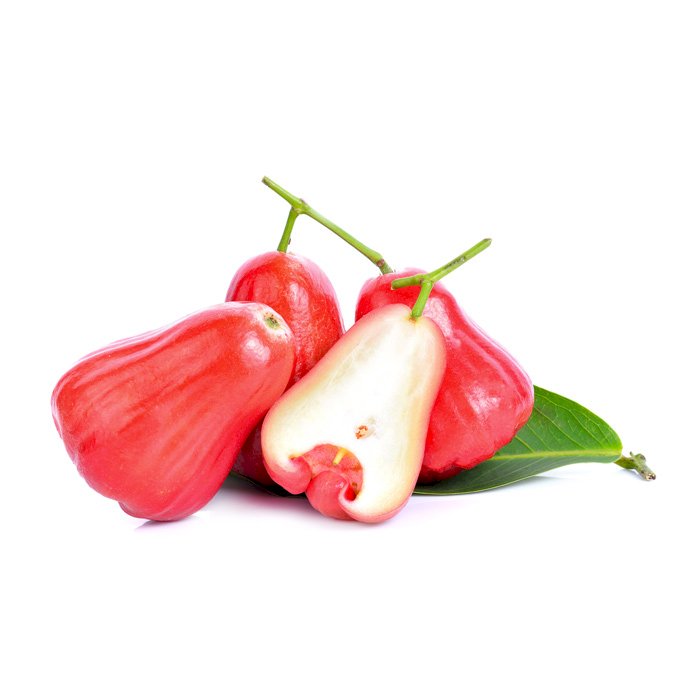 Rose-apple is an exotic fruit tree belonging to the Myrtaceae family. It bears the botanical name of Syzygium Jambos, also attributed to its fruit. It is also known as plum rose, water apple, pera de agua, cloud apple, wax apple or malay apple.

It is native to India and Malaysia.

The edible fruit is a yellow berry of 2 to 4 centimeters in diameter. Its internal texture is stretched to the point of giving the appearance of a hollow fruit in which a single seed resounds like a bell. Its pulp, however, possesses the consistency of a crunchy apple and the perfume of the rose, hence the different names that have been attributed to it. The Rose-apple can be eaten raw or served for perfumed liqueur preparations.

In Sanskrit, India is still called Jambudvipa, which means Land of the Rose-apples. In fact, Jambu means pomarrosa fruit and Dvipa means country.

It is grown in its region of origin and has been introduced in many tropical regions of the world as a fruit tree or ornamental plant. Initially cultivated for its fruits in the countryside of La Réunion, the Rose-apple was later used to decorate the parks and reforest the cleared areas or the edges of ravines. Very soon, the naturalized species colonized hundreds of hectares. The same happened in New Caledonia, where the plant was very invasive.