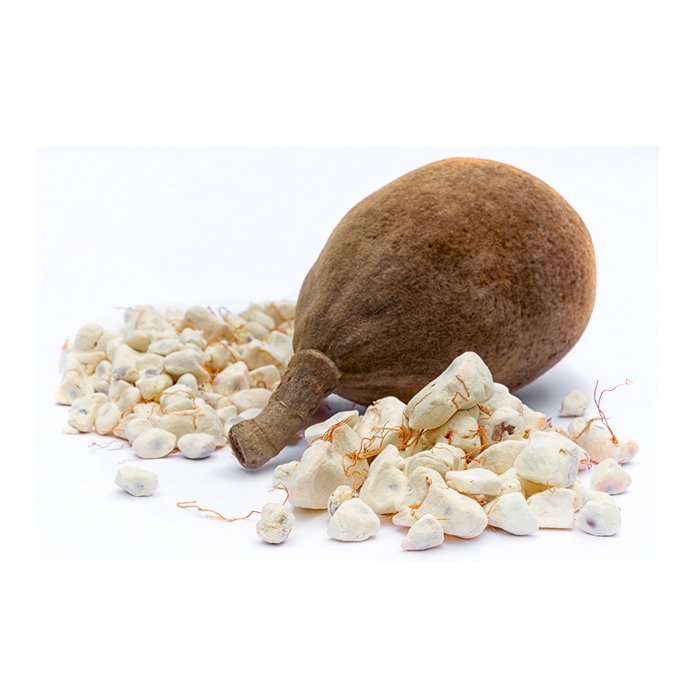 Adansonia digitata Adansonia, the African Baobab, is a large xerotic tree belonging to the family Malvaceae or Bombacaceae. Its fruit is known as Baobab Fruit, monkey bread or bouy.

It is native to the arid regions of Africa, bounded at the top of this continent by the desert and at the bottom by areas where temperatures are freezing.

The edible fruits are presented in the form of oblong peel, of floury pulp and a hundred seeds. It is large, ranging from 10 to 45 centimeters and shaped like a pear or melon. The dehydrated pulp is extracted from the inside and divided into small agglomerations. It has a bittersweet taste and is used in some African countries to make a refreshing drink (bouy juice) and energy.

You can use almost everything from the baobab, seeds for oil, fruits to make a drink, leaves to taste with vegetables. It should be noted that wood is not used because it is spongy. The baobab, with its bark, trunk and rare leaves, typical of tropical Africa, is the emblem of Guinea and the national tree of Senegal. It is of great social importance because it is at their feet that village members gather to express themselves.

Scientists have recently expressed concern about the future of the baobab, reporting the dramatic disappearance of Africa’s oldest specimens, possibly due to climate disorders. In South Africa, there is a programme that remunerates baobabs guardians who receive 320 rands (18 euros) for each centimetre of growth. Despite worldwide confidential production, annual powder exports increased from 50 tons in 2013 to 450 tons in 2018, according to the African Baobab Alliance, which brings together producers and sellers from the vast continent. In 2019 alone, we more than doubled our annual imports of powdered baobab fruit into the United States and proclaimed the world’s largest distributor, the American company Baobab Foods. The crop in Europe, Adansonia Digitata is preserved in a plant pot, and therefore remains small, even in bonsai.