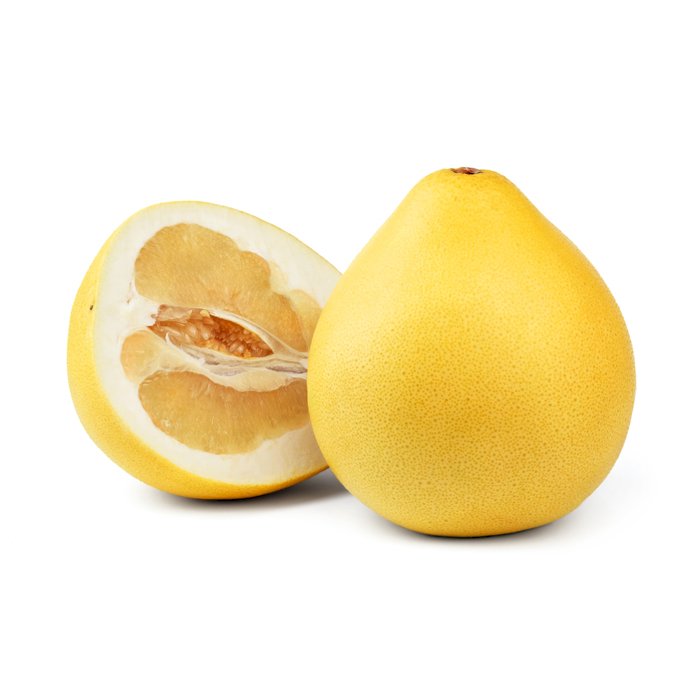 Grapefruit or Grapefruit Citrus Paradisi is a subtropical fruit tree of the family Rutaceae.

It is a natural hybrid of Citrus Maxima and the orange tree Citrus Sinensis originating from China. The terms grapefruit and Pamplemousse are widely used as vernacular or commercial names, especially in the expression Pamplemousse juice, when you should say grapefruit juice since the use of the term Pamplemousse to designate this hybrid is an abuse of language, by confusion with the name of one of the two parent species, Citrus Maxima. In 1870, John A. Macdonald, a Florida trader, saw this dazzling tree of golden fruits in bunches at his neighbors' house and bought it. Hence the Anglicism Grapefruit. He was the first to cultivate it. In the middle of the 19th century, it was a great success for the Duncan cultivar, but it had too many seeds. It was in 1860 that Marsh developed his own variety with smaller pips, and at the end of the 19th century this fruit spread to the American west, where other mutations allowed it to withstand the cold. This is how in Texas the Red Ruby and the varieties of pink pulp Grapefruit appeared.

Grapefruit Citrus Paradisi is a tree that can reach 6 to 12 m. and has a beautiful rounded shape. The fertilized flowers give rise to round, slightly flattened fruits, 8 to 25 cm in diameter, of green, yellow or pink colour depending on the variety. They always appear in clusters on the tree, hence their British name. Its juice contains about half the citric acid of lime or lemon juice, and about 50% more citric acid than the orange juice.

The fruit is often confused with the pamplemousse, also called pomelo, from which it inherited the important size and a little bitterness, but without the thick skin and the many seeds. This Citrus requires good insolation to limit the acidity of the fruits.

The annual world production of this fruit is currently estimated at 5 million tons. The main producers are the United States, Mexico, South Africa, Israel, Turkey and Sudan. France harvests around 8,200 tons in the overseas territories and Corsica. In our country, it is the 8th most consumed fruit, the french buy 1 kg per person per year.